Fraternal Value of the Week – The Jordan Standard of Sigma Chi

This week’s fraternal value comes from the Sigma Chi Fraternity. Recently, the Theta Psi chapter at the University of Waterloo was highlighted in the news for their efforts to talk about consent and sexual assault in their chapter and their fantastic “Break The Silence” PSA. 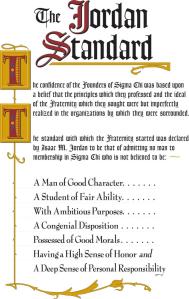 It’s clear that brothers of Sigma Chi recognize the connection between their values and working to promote consent and prevent sexual violence. You can trace this commitment to The Jordan Standard.

These standards of membership are there to make a statement to all current and incoming brothers of Sigma Chi; these are expected of men for them to be considered brothers. Therefore it is on brothers to constantly live up to these expectations. Without question, as the brothers of the Theta Psi chapter have shown, Sigma Chi brothers can live up to The Jordan Standard by working to promote consent and prevent sexual violence.

“A Man of Good Character”

For a brother of Sigma Chi to be “a man of good character”, he should work to create a culture of consent in his chapter. Whether it’s supporting survivors, talking with his brothers about consent and preventing sexual assault, or getting educated on how to be a courageous bystander, members of Sigma Chi can live up to this standard by recognizing what they can do as fraternity men.

“A Student of Fair Ability”

A brother should be committed to the academic aspect of the college experience. But a brother should also be educated in sexual violence prevention. If as fraternity men we want to be leaders and represent the best of the campus, it is important we’re knowledgeable about consent and preventing sexual assault. Therefore, to be the best students they can be, Sigma Chi brothers should attend the training/educational sessions offered on their campus.

Brothers of Sigma Chi should strive for their chapter to achieve it’s full potential, both as a group and as individual members. Working to promote consent and prevent sexual violence can seem ambitious, but brothers from chapter of Sigma Chi and other fraternities have taken on that goal and made an effort to achieve it. Brothers of Sigma Chi live up to this standard when they recognize the need to do this work and begin to take action as a chapter.

Chapters of Sigma Chi should strive be considered a positive contribution to their university, both by other Greeks and the rest of campus. Part of this is being an inclusive and welcoming group. A large part of creating a culture of consent is challenging sexist and homophobic attitudes and statements in your chapter. It may be difficult to call out your brothers, but doing so is helping them live up to their values and be better brothers.

“Good Morals” sounds like a simple thing to practice, but it takes a commitment to doing what’s right and proactively working to better your campus. As leadership and values-based organizations on campus, it’s on us as Greeks to translate morals into action – we have to work to prevent sexual assault and promote consent, not simply avoid doing the wrong thing. Brothers of Sigma Chi are living up to this standard when they work internally and externally to end sexual assault on campus.

“Having a High Sense of Honor”

Brothers are able to have a high sense of honor when they know they are living up to their potential and their values. Sigma Chi brothers, once again, can take action and live in such a way that this honor is earned. Practicing what you preach, going beyond what is expected to work to prevent sexual assault on campus is how to live honorably. Brothers of Sigma Chi should have that honor in everything they do – social, philanthropic, and otherwise.

“A Deep Sense of Personal Responsibility”

A chapter of Sigma Chi can’t just act externally, they have to recognize how as individual brothers they can live their values to promote consent and prevent sexual violence. Educating yourself on the issues and living in a way that reflects a responsibility, as a fraternity man, to do this work is crucial to living up to this standard and working as a chapter to create a culture of consent.

The Jordan Standard sets up for each brother of Sigma Chi expectations for both their undergraduate experience in the fraternity as well as their life after graduation. Working to live up to these values by helping your campus community combat sexual violence is showing your understanding of what it means to be a Greek leader. Sigma Chi brothers are actively working to connect their values and their organizations to the work of preventing sexual assault, showing how creating a culture of consent aligns with the foundation of their organization.

This entry was posted on February 8, 2015 by fratconsent.